A Trio of Deadly Tree Diseases 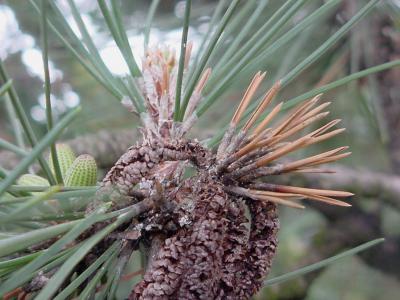 Austrian and Scots (Scotch) pines should not be planted in Iowa because they are extremely susceptible to a few diseases that rarely affect native white pines.

Sometimes homeowners plant trees based on their aesthetic appeal without considering how likely they are to become diseased. Two exotic pine species, Austrian and Scots (Scotch) pines, should not be planted in Iowa because they are extremely susceptible to a few diseases that rarely affect native white pines. Here is summary of three serious pine diseases commonly found in Iowa and some reasons why exotic pine species should not be planted.

Pine wilt can cause browning of needles over the entire tree or can be limited to specific branches. Scots pine is notoriously susceptible to pine wilt. However, Austrian, mugo, and red pines also can be infected. In rare cases the pine wilt can infect white pines. In most pines, needle browning from pine wilt is rapid and tree death can occur within three months.

Pine wilt is caused by the pinewood nematode, Bursaphelenchus xylophilus, a microscopic worm that clogs the water-conducting vessels of a tree, causing the needles to turn brown. The pine sawyer beetle carries the nematode from infected to healthy trees. Within the tree, the nematodes often feed on a blue-stain fungus, which can produce blue patterns within the wood.  This fungus is spread by secondary bark beetles that attack infected and dying trees.

Unfortunately, there is no cure for pine wilt. Control measures include removing trees infected with pine wilt, trimming branches that are infected, and maintaining good cultural practices, such as watering and mulching to prevent stress. Because Scots pines are so susceptible to this disease, they are no longer recommended for Iowa.

Diplodia (Sphaeropsis) tip blight is most common on Austrian and ponderosa pines, although other species, such as Scots, mugo and red pines can also be infected. Diplodia tip blight is caused by the fungus, Sphaeropsis sapinea. The most noticeable symptoms include new shoots with short brown needles, black spots (fungal fruiting bodies) at the base of those short needles, and black fruiting structures on the scales of second-year cones, visible with a hand lens.  Disease progresses over several years until the tree becomes a scraggly brown eyesore.

The Sphaeropsis fungus is spread during wet weather throughout the growing season. However, new shoots are most susceptible to infection when tree buds begin to swell and open in the spring. This disease usually affects areas of new growth and second-year cones, but older branches can also be infected and produce cankers if the tree becomes stressed.

Avoiding planting Austrian pine is the best way to avoid Diplodia tip blight. On existing trees, problems with the disease can be minimized by maintaining good cultural practices, providing sufficient spacing between trees for good air circulation, and not pruning trees after wet conditions because this could move fungal spores. In many cases, fungicide applications in the spring are required for adequate control for the disease.

Dothistroma needle blight is another disease of Austrian pines, causing reddish-brown spots to appear on the needles. The needles then die from the spots to the tip, causing the tips to be light brown and the bases of the needles to remain green. Typically, this disease affects the lower branches of the tree first and then gradually moves upward.  Once spots appear, needle tips usually die within three weeks and black fungal structures will then emerge, visible as black dots with a hand lens.

Dothistroma needle blight is caused by the fungus Mycosphaerella pini and besides Austrian pines it may also affect mugo and ponderosa pines. Fungal spores are spread during wet conditions from spring until fall and infection can occur on needles of all ages.

Control measures for Dothistroma needle blight are similar to those for Diplodia tip blight – avoid planting Austrian pines. On existing Austrian pines, providing good air circulation, maintaining good cultural practices, not pruning after wet conditions, and applying fungicides may help. In addition, remember not to plant healthy trees next to infected ones.

Correctly diagnosing pine diseases on existing trees is important; however, avoiding planting exotic pine species is the best way to prevent these diseases. Planting native pine species will be the best choice for you and your pines in the long run.

For more information regarding the diagnosis of pine diseases or management options contact the ISU Plant Disease Clinic at (515) 294-058. These ISU Extension publications are available at any ISU Extension county office or can be ordered online at https://store.extension.iastate.edu
• Common Diseases of Conifers in Iowa (PM 1528)
• Sustainable Urban Landscapes: Pine Wilt (SUL 9)

Three high resolution photos are available for use with this week's column:
PineWilt31607.jpg Pine wilt can cause browning of needles over the entire tree, particularly on Scot (Scotch) pines.
DiplodiaTipBlight31607.jpg A noticeable symptom of Diplodia tip blight is the development of short brown needles on new shoots, especially on Austrian pines.
Dothistroma31607.jpg Dothistroma needle blight causes reddish-brown spots to appear on the needles, which then die from the spots to the tip, causing the tips to be light brown and the bases to remain green.