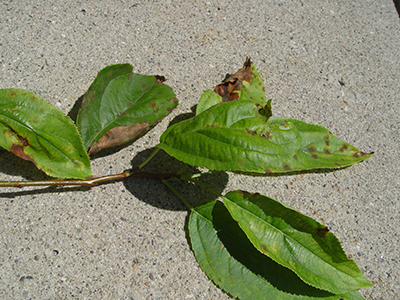 Across Iowa, crabapple trees have been dropping leaves this summer.  Although many do so every summer, this summer the blatant leaf-dropping has been especially prevalent.  What causes these attractive trees to drop their leaves mid-summer?  The answer is a fungal disease called apple scab.

A fungus called Venturia inaequalis infects crabapple leaves early in the spring.  As the fungus grows in the developing leaves, it causes purplish-brown spots, often clustered along the leaf veins.  The spots can grow up to  a half inch in diameter, with feathery margins when young and more distinct margins as they mature.  Most people don’t notice the disease, though, until these infected leaves turn yellow and fall off the tree. Some people rake the fallen leaves out of their yards daily for weeks, until the tree is almost completely bare by midsummer. The crabapple that was spectacular while blooming in spring has become an eyesore by August.

The apple scab fungus spends the winter in the fallen leaves, and in the spring it produces spores that can infect the new crop of leaves.  Besides crabapple, the disease also affects apple, pear, hawthorn and mountain ash.  Apple scab is the most economically important disease of commercial apple orchards.

Why do some crabapple trees get hit with scab every year, while others seem to be unharmed most years? Crabapple cultivars vary greatly in their ability to fend off the apple scab fungus. Some popular cultivars, such as “Spring Snow”, are very susceptible to apple scab, and they lose their leaves nearly every year. Other cultivars, such as “Prairifire” are resistant.  Even a resistant variety can get apple scab if the weather is very favorable for disease, but in most years it will be disease-free.

We see apple scab every year, but this year the disease has been especially severe in much of Iowa, causing defoliation earlier than usual and causing more severe leaf drop. The severity of many plant diseases is largely dependent on the weather. Apple scab is favored by cool, wet weather in the spring, when the fungus infect the new leaves. Because this spring’s weather was so favorable, some resistant trees that haven’t had apple scab for years are dropping leaves this year.

Although naked trees in summer are ugly, apple scab does not kill crabapples and usually does not seriously hurt them. But we plant crabapples to be pretty, so what can we do to manage apple scab? First, choose a resistant cultivar when planting a new crabapple tree. There are many choices of resistant cultivars with beautiful spring blossoms. Realize that resistance is relative, and a “resistant” cultivar can still become diseased under some conditions—but it will have fewer disease problems than a susceptible cultivar.

Since the apple scab fungus survives the winter in fallen leaves, raking up and destroying those leaves at the end of the season can help to minimize problems next year. Keeping trees well spaced and pruned to promote airflow through the canopy can also help. Sometimes fungicide sprays are used to prevent infection of susceptible cultivars in the spring. However, the sprays must be repeated, and they are ineffective once symptoms appear.

Starting with a resistant cultivar is the best way to ensure that your crabapple stays beautiful and leafy throughout the summer.

Two high resolution photos are available for use with this week's garden column:
Photo 1: A susceptible crabapple tree has lost most of its leaves to apple scab by midsummer [applescab.jpg 1.4 MB]
Photo 2: Apple scab causes brown lesions on crabapple leaves [applescab2.jpg 1.4 MB]