Bugs in the Bathroom 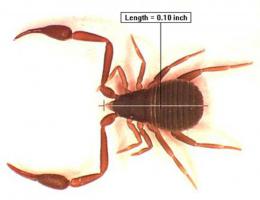 Unlike scorpions, pseudoscorpions are very small, usually less than 5 mm long, and they have no sting on the end of their flat, oval abdomens.

Entomologists are fond of quoting Woody Allen’s character from the 1977 movie Annie Hall:  “Honey, there's a spider in your bathroom the size of a Buick.”  At one time or another nearly everyone sees an insect or spider in the bathroom and scrutinizes it with interest, fear or disgust (depending on your point of view).

One assumption that typically follows discovery of a bug in the bathroom, especially if the unfortunate critter is trapped in the sink or bathtub, is that the invader found its way into the house via the drain pipes.  This is a very common and widely-held belief: insects, spiders and other unspeakable vermin are thriving in the drain pipes and waiting to move in and take over the house.

Actually, there is a much simpler explanation for why insects and spiders are found in the bathroom, other than assuming your plumbing is malfunctioning.  While it is remotely possible that insects can enter through drains, it is much, much more likely that they got in the old-fashioned way:  they either walked in from outdoors through cracks and gaps in the wall, or they are already living inside your house. These explanations are much easier to defend than the bugs-up-the-drain scenario.

First, it is unlikely there are many insects (and even fewer spiders) surviving in your sewer or septic system.  Even if they are in the drains, most insects are not good submerged divers.  That is, they don’t have the structures to swim upstream, under water, through the maze of pipes that constitute your drain system.  Second, if the insects have an unimpeded route from the sewer to your sink, there is something wrong with your plumbing.  The various water traps installed in drain lines, including the one right below the sink or bathtub, are there to keep out sewer gas, and also work to keep out bugs as well.

So why do we see so many insects in the bathtub and sink if they are not coming up through the drain?  The simple explanation sounds like an old television commercial: “They’ve fallen . . . . and they can’t get up.”  Sinks and bathtubs work for catching insects the same way a tiger trap worked in the old movies.  First, you dig a very deep pit in the middle of the trail.  If the hole is deep enough and the sides are steep enough the tiger (or elephant or “bad guy”) will fall in and not be able to climb back up the vertical sides.  The same thing happens to spiders, ants, cockroaches, centipedes and other assorted pests.  While walking on the wall or the rim of the sink or tub, they may have been attracted down into the sink to drink water from the trap, or they simply crawled or slid down the steep, slippery side.  At any rate, once they reach the bottom of the sink (the pit) they are unable to climb back out and are forced to wait for you to find them there in the morning.

Two of my favorite bathroom bugs are the house centipede and the pseudoscorpion.

House centipedes are common household residents with long, flattened, segmented bodies. They are up to 1.5 inches long and have 15 pairs of very long, almost thread-like, slender legs.

Though house centipedes are frequently trapped in the bathtub, sink or lavatory, that is not where they originate. Centipedes live and grow in damp, secluded portions of basements, closets, bathrooms, unexcavated areas under the house and beneath the bark of firewood stored indoors. They feed on small insects and on spiders. Thus they are beneficial, though most homeowners have a different opinion and consider them a nuisance. The house centipede is harmless to people.

If house centipedes are too abundant for comfort, dry up and vacuum clean, as much as possible, the areas that serve as habitat and food source for centipedes. These are the darkest, hardest to reach areas of the house such as under shelves, behind stored boxes, behind the washing machine and so forth. Residual insecticides for indoor insect control can be used, but the benefit will be little to none.

Pseudoscorpions are tiny arachnids closely related to mites, ticks and spiders. They live outdoors under mulch, leaf litter and other damp areas where they feed on small insects and mites. They usually go unnoticed until one has accidentally wandered indoors by mistake and slid to the bottom of the sink.

Like other arachnids, pseudoscorpions have eight legs. In addition, they have a pair of enormous pincers (called pedipalps) on the front of the body that gives them a strong resemblance to the true scorpions.  Unlike scorpions, pseudoscorpions are very small, usually less than 5 mm long, and they have no sting on the end of their flat, oval abdomens.  Pseudoscorpions are predacious and beneficial. They cannot bite or sting and they do not attack the house structure, furniture or occupants. They may be an annoying nuisance, but only rarely are they a chronic pest problem.

Most of us have very few pests in the house. But keep your eye on the bottom of the sink for hapless victims that become trapped there.  And finally, as you ponder what the future holds for the trapped arthropod, just remember it’s probably not the sewer’s fault that there’s a bug in your bathroom.

There is one photo for this week's column pscorpion.jpg, 250 kb