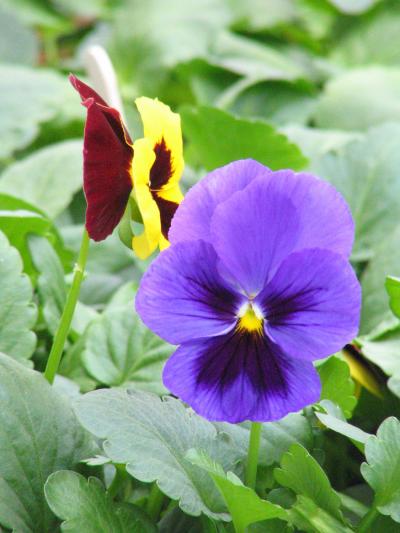 Pansies can be planted in Iowa as soon as the soil can be worked in April.

Pansies are a popular spring garden annual in the Midwest. Their cheerful flowers often remind us of “painted faces” and their bright colors remind us of spring. But did you know that there are almost 500 species of pansies or violas in the world? The amazing diversity of the genus Viola has given us today’s wonderful variety of pansies.

Pansies are generally classified as Viola ×wittrockiana, a complex hybrid of many Viola species. Pansies are available in every color of the rainbow and many colorful combinations. There are three basic color patterns in pansy flowers: the single, clear color types; the single color type with black penciling radiating from the center; and the common “face” type with the dark centers. Pansy flowers may be up to 3.5 to 4 inches in diameter with single, semi-double or double flower forms. The plants are compact, normally ranging from 6 inches to 12 inches in height with 6- to 9-inch spreads.

Pansies and Johnny jump-ups are annuals. Neither will survive through the summer in the Midwest. If planted in late summer, they usually will not survive the winter. However, Johnny jump-ups often come up freely from seeds the following spring. There are several perennial Viola species (V. labradorica, V. papillionacea, V. pedata) that are native, woodland wildflowers in parts of the Midwest.

Violas have been cultivated in Greece since the fourth century B.C. for herbal medicines and beautiful flowers. Pansies, however, didn’t appear until the early 1800s when William Thompson, an English gardener, bred several species of violas to create the start of the larger, brightly colored flowers we know today.  He is credited with developing the “face” type pansies, and the first was named ‘Medora’ in 1839.

By the 1850’s many pansy strains were available and breeding efforts continued in England, Scotland and Switzerland. At the turn of the 20th century, Dr. Charles Stewart, a Scottish grower, introduced pansies with clear colors or no faces.  In this century, pansy breeding efforts continue in the United States, Germany, Italy and Japan. Breeders continue to introduce pansies with novel colors and color combinations, larger flower sizes and durability.

Growing Pansies in the Garden

In Iowa, pansies can be planted as soon as the soil can be worked in April. They are quite tolerant of light frosts and freezing temperatures. Pansies are also occasionally planted in late August or early September for their fall flowers.

Pansies prefer moist, well-drained soils in sunny to partially shaded sites. Plants placed in partially shade, cooler locations will persist longer into the summer. Most cultivars will work well in containers and baskets.

Pansies are available in one of the widest ranges of flower colors of any garden annual.  Black, orange, bronze and true blue are just of few of the unusual flower colors of pansies. Besides having flowers of many colors, pansy flowers are also noted for their colorful combinations.

There are hundreds of series of pansies available for your garden. A series is a collection of cultivars that varies in one trait; usually flower color. For example, Matrix is a series with many flower colors or color combinations. ‘Matrix Citrus’ is a collection of orange, yellow, gold and white flowering forms. Sorbet is a Viola hybrid series with specific cultivars called ‘Lemon Chiffon’ and ‘Blueberry Cream’. Pansy series are often sold as mixes or individually by cultivar. Different series vary by flower color, height or habit.

Pansies have come a long way since the 1800s. Today, breeders are not only selecting and introducing new series with novel flower colors, but also are selecting for compact habits, free-flowering forms and increased adaptability to weather conditions. If you haven’t tried pansies in the garden in the past few years, they might be worth a second try.