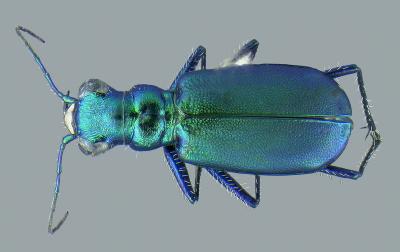 A call has gone out to Iowans to keep their eyes open for the emerald ash borer, an exotic pest of ash trees that is emerald green in color and one-half inch in length. Since issuing this request, various green insects have been sent to the Iowa State University Iowa Insect Clinic by alert citizens. Fortunately, none have been the emerald ash borer and, to date, this insect has not been found in Iowa.

Of the green insects received, tiger beetles have been very common. Let’s take a brief look at this unusual group of insects.

According to the United States Geological Survey, there are nearly 2,000 species of tiger beetles worldwide, 120 of these in North America and 18 species in Iowa. Most tiger beetles inIowa are brown or coppery, but five species are metallic green in color. The six-spotted tiger beetle, Cicindela sexguttata, has been the most common species received by the Insect Clinic.

Adult tiger beetles have long sickle-shaped mandibles, large eyes, a head that is wider than its thorax and long running legs. Their colorful, iridescent body is the result of structural pigments and a secretion that gives an effect similar to a film of oil on water. These colorful markings disrupt the overall outline of the beetle, camouflaging it against its background.

These insects are well known for their ground speed. TheUniversity of Florida’s insect record book lists an Australian tiger beetle species as the fastest running insect, clocked at 5.6 miles per hour. Although that may not seem remarkable, this beetle’s speed relative to humans is 720 miles per hour. A researcher at Cornell University stated that a native tiger beetle species was ten times faster than the best human sprinter. Tiger beetles are also agile fliers, avoiding predators (or observers) by quick short flights near the ground, always landing facing the wind.

As an adult tiger beetle pursues a prey at these high ground speeds, they often stop ‘get their bearings’ and then proceed with the chase. According to a researcher at Cornell, this stop-and-go pursuit is necessary because the insect’s vision shuts down after it accelerates toward its prey. So, the high speeds cause the beetle to go blind, temporarily.

There are two types of tiger beetle life cycles. Adults of some species are only active in the spring and winter, while other species are active only during the summer. The insects pass through three larval stages and a pupal stage before emerging as adults. Only one generation is produced each year in Iowa.

The larva, also called a doddlebug, is an ugly, hump-backed grub that lives in vertical burrows in the soil. The beetle larva has an enlarged head fused with its prothorax to form a circular plate. This plate is bent at a right angle to its body and serves to plug the burrow opening. The larva is armed with large, powerful, sickle-like mandibles on its head. Another body modification is a hump on the fifth abdominal segment bearing curved spines; this structure anchors the larva within its burrow if it encounters a large prey or predator.

One account of larval feeding has been referred to as a deadly ambush: the larva keeps its lid-like head flush with the top of the burrow awaiting an unsuspecting prey. When sensing a victim, the larva springs out of the burrow resembling a jack-in-the-box, snatching the prey in its mandibles. The larva then pulls the quarry into its burrow for consumption. Tiger beetles (larvae and adults) are fluid feeders, secreting digestive chemicals into their prey while crushing it with their mandibles.