Puffballs and Stinkhorns and Fairy Rings, Oh My! 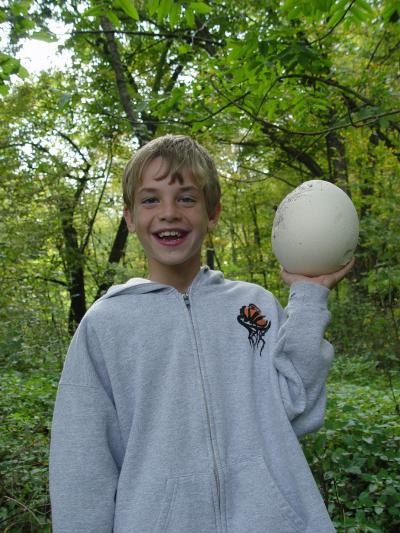 A walk through the forest at this time of year may lead to the discovery of what appear at first glance to be giant marshmallows. A closer investigation reveals that the spheres are composed of a soft spongy material – rather than a soft sticky material. These objects are puffballs, produced by certain soil-dwelling fungi. There are a number of different species of fungi that form puffballs and they can be found growing on the ground in forests, pastures and lawns.

Giant puffballs are typically the most exciting to discover. They can grow to be well over a foot in diameter and weigh more than 10 pounds. Like marshmallows, puffballs are considered tasty by some. They are edible when young and tender, and can be grilled, sautéed or fried. Some people liken the taste to tofu. Young puffballs can look similar to other fungi, including the poisonous amanitas. Cut open puffballs to be sure they do NOT have gills on the inside. The inside texture of a young puffball should be uniformly spongy.

Always be sure to be certain of the identity of a fungus without any doubt before eating it. Even those fungi that are classified as edible can cause adverse reactions in some people. It is a good idea to eat only a small portion if trying an edible fungus for the first time.

As puffballs mature, the outer layers turn light brown. The interior fills with trillions of fungal spores that are released in a cloudy puff when the mature structure bursts open, hence the name puffball.

Another fungus that is quite common near the end of summer and early fall is one that you may find by following your nose – a stinkhorn. Stinkhorns are appropriately named because they give off a foul odor. They are not poisonous or harmful to plants or people.  Their offensive smell would keep one from even considering edibility.

There are several species of stinkhorn fungi found in Iowa. They live off dead organic matter and are especially common on mulch used in the landscape. Stinkhorns start off as an egg-like structure in the soil, about the size of a golf ball. As the fungus develops, a stalk grows upward and is topped with a slimy cap coated with a mass of olive-green to brown spores. The putrid smell of the stinkhorn cap attracts flies and other insects that crawl on the stinkhorn, get covered with slime and spores, and fly away to land somewhere else, disseminating the spores. Stinkhorns range from about 4 to 8 inches in height.

Some people find the smell and appearance of stinkhorns offensive. Given time, stinkhorns will wither away and disappear. This process can be hurried along by raking or breaking off the above ground structure of the fungus. Stinkhorns often appear in the same areas year after year.

A final example of a fungus often found near the end of the growing season is a fairy ring fungus. Fairy ring fungi can often be spotted from a distance, even from the window of a fast-moving car. The primary symptom of a fairy ring is the presence of a circle or arc of dark green or brown grass. Fairy ring circles can be many feet in diameter, as they tend to grow outward slowly over time.

Although once believed to be caused by fairies dancing in a circle during the night, we now know that fairy rings are caused by an assortment of fungi that feed on dead organic matter in the turfgrass and soil. As the fungi break down this organic matter, the nutrients released may lead to a darker area of turfgrass. If the fungal structures are very dense and interfere with the movement of water to the turfgrass roots, circles of dead grass may occur. Some fairy ring fungi produce mushrooms in the circle at certain times of the year, often in late summer or early fall.

A mycologist (fungal expert) would likely recommend treating a fairy ring as an interesting curiosity rather than a problem. Fairy rings are difficult to eradicate from an area. Fungicide products are not usually very effective, which leaves removal of the soil in the affected area the primary means of control. This may not be feasible if the fairy ring has a large diameter.