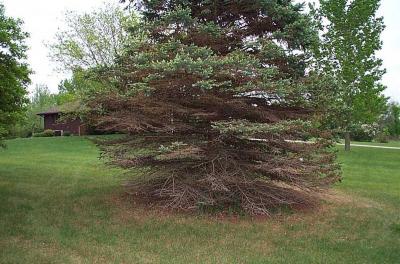 A needle fungus is one problem that can cause spruce trees to become unsightly.

Spruces are a favorite evergreen for yards and windbreaks in Iowa. However, they are susceptible to a few problems that can leave them unsightly.  Knowing about these common spruce ailments is the first step toward minimizing problems with these beautiful trees.

Perhaps the most common disease of spruces in this area is Rhizosphaera needle cast, caused by the fungus Rhizosphaera.  This disease is most apparent on older needles on the tree, causing them to turn purplish-brown before falling off.  Trees are usually affected first on the inside of the tree, working out, and at the bottom of the tree, working up.  Affected trees become sparse over time and can eventually die from this disease.

You can scout for Rhizosphaera needle cast by using a hand lens to observe both green and brown needles.  Tiny, black dots (fungal growths) are visible in lines along the length of some infected needles.

Damage by Rhizosphaera needle cast can be minimized by inspecting plants before purchase, spacing the trees properly when planting, weeding and pruning to promote airflow in the canopy, and avoiding shearing when plants are wet.  When trees are found to be infected, fungicide sprays can be used to reduce spread.  Several common fungicides can be used, including Bordeaux mixture, other copper compounds, or chlorothalonil.  Timing of the sprays is especially important; spray once in the last two weeks of May and again four to six weeks later.  Sprays must be applied yearly until symptoms no longer appear.

Another common problem, mite damage, causes spruce needles to turn a dusky yellowish or gray.  Mites are tiny spider-like creatures that suck the sap from spruce needles, so that when viewed under magnification the needles appear speckled with yellow flecks.  Affected needles may fall from the branch, leaving a sparse tree.

Several types of sprays may be used to minimize damage from mites, but they must be applied when the mites are actually present.  You can scout for mites by shaking a symptomatic branch over a white sheet of paper and then looking for tiny, moving dots (mites).  When mites are found, sprays you can use include horticultural oil, insecticidal soap, or malathion.  Spraying tree branches with a forceful stream of water can also help to dislodge mites, and using chemical sprays may not be necessary.

Sometimes individual branches of spruces turn brown and die. Scattered, dead branches are the hallmark of Cytospora canker, another fungal disease. A canker is an area of dead bark, and when that dead area grows all the way around the branch, it girdles and kills it. When a canker grows all the way around the trunk of a tree, it can kill the whole tree. On spruces, Cytospora canker is most visible as areas on the bark leaking abundant white, sticky resin on dead branches.

Branches with resin-leaking cankers should be pruned out to reduce the amount of fungus in the tree. Canker diseases occur on trees that are undergoing other stresses, especially drought, so keeping trees in good vigor (such as by watering during dry periods) can help to prevent Cytospora canker.

Sometimes needles on spruce trees turn brown and no infectious disease or insect damage is apparent. A variety of “abiotic” (noninfectious) stresses can cause damage to spruce trees.  Such stresses include drought stress, injuries to the trunk, winter injury, damage from misapplied chemicals, or root problems. A thorough review of the tree’s location and recent history can help to diagnose these problems.

With a little awareness of the common problems on spruce, homeowners can enjoy the abundant beauty that spruce trees bring.