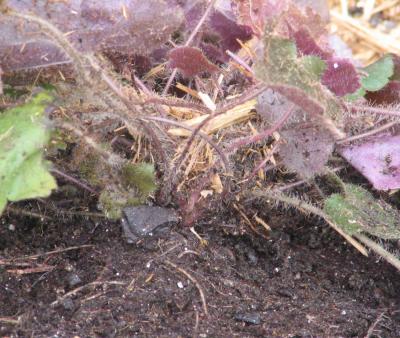 Heaving may break off roots and expose a plant's crown and remaining roots to cold temperatures and drying winds that may seriously damage or destroy perennials.

This unusually mild winter has been nice – at least for us. However, it may be creating problems for some of our landscape plants. Frost heaving often occurs when an area experiences frequent periods of above and below freezing temperatures.

What is frost heaving, you ask? Actually it’s not much different than it sounds. Due to wide temperature fluctuations, exposed soil surfaces freeze and thaw repeatedly. This repeated freezing and thawing causes the soil to expand and contract, which can lift up or heave some perennials out of the soil. Heaving may break off some of the plant’s roots. It also exposes the plant’s crown and remaining roots to cold temperatures and drying winds. Freezing and drying injury to a plant’s roots and crown may seriously damage or destroy perennials.

To prevent frost heaving from damaging plants at this time of year, inspect your garden perennials and take corrective actions. If plants are heaving, place soil around the base of the plant to cover any exposed roots. You also could try to carefully tamp the plants back into the ground. Then cover the plants with several inches of straw or pine needles to prevent further freezing and thawing cycles in late winter.

Ideally, mulch should be applied to newly-planted garden perennials in the fall after several hard frosts. The weight of the mulch will keep the plant crowns and roots in contact with the insulating soil. The mulch also will help moderate soil temperatures, preventing frequent freezing and thawing cycles, and ultimately reducing heaving of root systems. Strawberries are another perennial that frequently heaves in winter. This is one reason why many home gardeners cover their strawberries in fall.

It also is advisable to avoid planting perennials (particularly those on this list) late in the growing season. Some fall planted perennials will not have sufficient time to establish root systems that resist the expanding and contracting of our soils. This is why fall-planted garden mums often do not survive the winter.

So, if you always shop those end of season sales for perennials, be sure to add several bags of mulch to your shopping list to help protect your investment for spring.

There are two photos available for this week's column.
coralbellheave31006.jpg
coralbellmulch31006.jpg