Slug it Out with Slugs in Your Garden 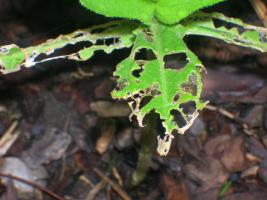 Slugs are nocturnal and feed at night when we can't see them.

Garden crops have a lot of enemies, but few are as non-selective and destructive as slugs. Unlike plant diseases and many insect pests, slugs are not host-specific and have a very diverse diet from asters to zinnias, with hostas being one of their favorites.  As much as we hate them for the damage they do to our garden plants, we need to recognize slugs as an important part of the ecosystems because many species are decomposers and feed on fallen leaves, dead insects and dead worms. They are also food for snakes, toads, turtles and birds.

Slugs are easy to identify, but not always easy to find. They are basically snails without their protective shells. Depending on the species, slugs range in size from less than an inch to 10 inches long, such as the banana slug, native to the West Coast. One of the most common slug species found in Iowa gardens is the gray garden slug. They are typically less than an inch long and their plump, slimy bodies range in color from light gray to brownish black.

Most slug species overwinter as adults. In the spring or early summer, eggs are laid in moist areas near the soil surface, such as under dead leaves, rocks, mulch or flower pots.  Baby slugs hatch when there is plenty of moisture present and begin feeding immediately.They resemble adults but are smaller and lighter gray in color.

Slugs are nocturnal and feed at night when we can’t see them. They prefer cool, dark, moist hiding places during the day. Cool, wet spring conditions are ideal for slugs, resulting in early, serious damage to plants. They destroy young seedlings and chew holes in hosta foliage, leaving them unattractive the entire season. Unfortunately, they don’t die in the middle of the summer when conditions get hot and dry. Slugs bury themselves in the soil or find a moist, well-protected spot where they remain in a state of suspended animation. They secrete a mucous-like cocoon around themselves and wait it out until there is enough rain or moisture to dissolve the mucous and soak the water into their bodies. They can loose as much as 50 percent of their weight during a dry spell and then regain it all after only two hours of rehydrating. Slug damage is often as serious in late summer as it is in the spring due to renewed soil moisture levels and higher populations.

Slugs secrete a slimy mucous trail as they move across plants and smooth objects. This prevents them from drying out and provides a protective track on which they glide across sharp surfaces. It can be seen as a silvery trail on leaves.

Cultural Control.  One tactic is to reduce the favorable habitats where slugs live and reproduce. Since they require moist soil in which to lay their eggs and cool, moist, sheltered sites in order to hide during the day, open up the garden to allow more sun and air circulation so that the soil isn’t damp for extended periods of time. Keep mulch layers shallow; a uniform, one-inch layer will prevent rapid drying around the plants and will not retain excessive soil moisture. Since slugs also feed on decaying plant material, do not mulch with fresh grass clippings where slugs are a problem, and rake leaves from the garden beds in the fall.

Mechanical Control.  Traps are a mechanical form of slug control. Trap boards or moist newspaper or carpet samples, about a square foot in size, can be placed around plants where slugs have been feeding. After a couple of days, check the underside of the traps and remove and destroy the slugs that have gathered there to hide. Inverted melon rinds set on the soil will also attract slugs but may make your garden look like a waste site or compost pile.

Slugs are also attracted to beer, so it is often used to trap slugs.  A beer trap consists of a shallow container, such as a yogurt cup, buried to within a half inch of the rim and filled with beer. Slugs will find it irresistible, crawl in and drown. You may want to put a loose cover over the beer trap to shade it and prevent rain from diluting it.

Some gardeners get great satisfaction from stalking slugs early in the morning, sprinkling salt on unsuspecting slugs and then watching them shrivel up as the salt removes water from their bodies. This rather sadistic method is neither an efficient nor effective control method.

Chemical control. Since slugs are not insects, they are not controlled with insecticides, but rather with molluscicides applied as bait. Apply slug baits in the spring or fall when slugs are active. It is a good idea to irrigate before applying a bait to promote slug activity and apply it in the late afternoon or evening. Many baits contain metaldehyde. Although it is effective, it has its faults. It is rapidly inactivated by sunlight and water so has to be reapplied frequently. It cannot be used in vegetable gardens and can be toxic to pets that ingest it. Alternative baits are available that contain iron phosphate (ferric phosphate) as the active ingredient. Trade names include Sluggo and Escar-Go! Schultz Slug and Snail Bait and others.  Although some experts consider iron phosphate baits to be slightly less effective than baits containing metaldehyde, they do have several advantages. They can be used more effectively under high moisture conditions because iron phosphate doesn’t readily dissolve in water, they can be used around edible crops and they do not pose a threat to pets, birds and other non-target species.

There is one photo available for this week's column SlugDamage6906.jpg, 1 MG