Helpful Fungus Among Us 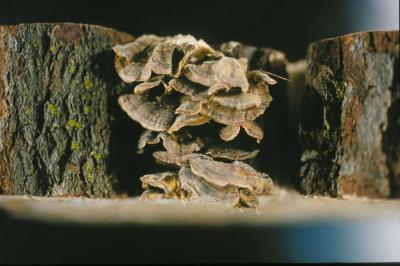 Without fungi like this turkey tail fungus, the world would be full of dead plant and animal bodies.

Say the word “fungus” and most people think of negative things—moldy bread, deadly toadstools, plant diseases in the garden or nasty skin infections. Although many fungi can be harmful to people, animals and plants, the vast majority are actually essential to the functioning of the ecosystem. These helpful fungi are the overlooked, “unsung heroes” of the natural world.

About 100,000 species of fungi are known, and it is estimated that there may be as many as 1.5 million species of fungi in the world.  Of these, the vast majority live as “saprophytes.” All fungi are unable to make their own food, and must consume other live or dead organisms in order to survive. Saprophytes are organisms that get their nutrition from dead organic matter, including fallen wood, dead leaves or dead animal bodies.  Saprophytes do not usually hurt living organisms.

The reason saprophytes are so beneficial to the environment is that they are the primary recyclers of nutrients. They break down organic matter so that the nitrogen, carbon and minerals it contains can be put back into a form that other living organisms can take up and use. Without saprophytes, the world would be full of dead plant and animal bodies, with no recycling of nutrients to sustain life.

Although many bacteria and small animals such as insects also live as saprophytes, it is the fungal saprophytes that decompose most plant debris throughout the world. Fungal saprophytes do most of their work invisibly to us, living in soil or debris as fine microscopic threads, but occasionally they make themselves visible by creating a mushroom, bracket or other fungal body as their way of reproducing.

Another large group of helpful fungi function with plant roots as “mycorrhizae” (singular mycorrhiza).  “Mycorrhiza” means “fungus-root,” and mycorrhizae are intimate associations between plant roots and special fungi. The fungi in mycorrhizae are attached to the plant roots and form a thread-like network, extending beyond the roots.  This extra network takes up additional water and mineral nutrients and supplies them to the plant, in essence acting as an extension of the plant’s root system. In return, the plant gives some of its sugars as food to the fungus. It is a mutually beneficial relationship.

Additionally, mycorrhizal fungi may stretch long distances, connecting the roots of two or more individual trees. In doing so, they promote the sharing of nutrients among the trees, ensuring even distribution of essential nutrients.

Fungi that serve as decomposers and in mycorrhizae are a vital, though often unseen, component of the ecosystem. Life as we know it on this planet would not be possible without the helpful fungus among us.

There are two photos for this week's column.  If you use these photos, please give the following credit; Photo courtesy of Paula Flynn, Iowa State University Extension.
TurkeyTail12706.jpg [828 kb] Turkey Tail Fungus
mycorrhiza012706.jpg [876 kb] Mycorrhizae Fungi on Plant Roots