Too Many Legs to Count 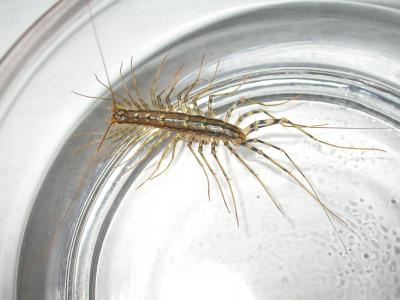 The house centipede is a common home and garden resident.  It is up to 1.5 inches long and has 15 pairs of very long, slender legs stretched to the sides of the body.

You probably remember the old child’s rhyme about the distracted centipede. There are several versions and variations. One goes:

“A centipede was happy quite,
Until a frog in fun
Said, ‘Pray, which leg comes after which?’
This raised her mind to such a pitch,
She lay distracted in the ditch
Considering how to run.”

One of the marvels of the natural world is that animals with more legs than you can count are able to walk – and to run – with seeming ease. How do they do it?

Centipedes are flat, elongate animals with lots of legs. Their name suggests they would have one hundred legs (centi = Latin for a hundred and pede = Latin for a foot) but the most common centipede comes up 70 legs short of the advertised quantity.

When (and if) Iowans think about centipedes they probably picture the house centipede. This common home and garden resident is up to 1.5 inches long and has 15 pairs of very long, slender legs stretched proudly to the sides of the body. Each of the 30, fragile-looking legs is almost equal to the length of the body and is encircled by dark and white bands. The body is brown to grayish-yellow with three dark stripes.

There are about 3,000 diverse species of centipedes in the world, found from north of the Arctic Circle to the edges of the desert. Most are small but a few, especially in the tropics, may be 10 inches or more in length. The body of a centipede consists of numerous flattened segments. Each segment (except for the last two and the first one behind the head) has one pair of legs. Centipede legs may be short as in the case of common outdoor centipedes found plodding under mulch or leaf litter or in rotten wood. Centipedes with long, thread like legs (such as the house centipede) scamper very quickly.

Both centipedes and millipedes are wormlike, multi-legged animals (and therefore, detested). Both are frequently noticed in the garden or house. Telling the two apart is fairly easy if you allow yourself to get close enough to count the number of legs present on any mid-body segment.  Millipedes, the harmless “recyclers” of garden mulch, have two pairs of legs per body segment, twice the number of legs found on centipedes.

Centipedes are predators. They feed on a variety of small animals such as insects and spiders. By some accounts centipedes are ferocious and they will eat or attempt to eat anything that does not eat them first. That includes each other. The really large centipedes may feed on small mammals such as mice, and occasionally on small birds or reptiles. Centipedes are primarily nocturnal and wander at night in search of food. A captured prey is paralyzed by venom before it is devoured.

The fear many people have toward centipedes is generally unwarranted. First, centipedes are beneficial and their role as predators should be appreciated. Second, centipedes are shy and will use their agile, fast running abilities to retreat from people when possible. Biting may occur when a centipede is stepped on, picked up or otherwise restrained and threatened.

Small centipedes, such as the house centipede, are not likely to penetrate the skin on those rare occasions when they stop long enough to try to bite. Large tropical centipedes, on the other hand, can bite and cause pain and discomfort but serious complications or death are very rare.

If you have more centipedes in your house than you can stand (remember they are beneficial) try to dry up and clean, as much as possible, the areas that serve as habitat and food source for centipedes. Though we see house centipedes on the bathroom or bedroom wall or accidentally trapped in the bathtub, sink or lavatory, they spend most of their time hiding in the damp portions of basements, closets, bathrooms, unexcavated areas under the house and beneath the bark of firewood stored indoors.

Insecticide sprays can be applied to suspected hiding places in the house, but their effect is very limited. Better to live and let live. Or try to confuse them by asking how they can run so fast!