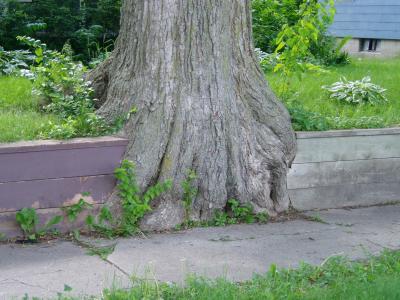 Often, the general decline of trees is directly related to the health and vigor of their root systems.

Trees are an important part of our environment in Iowa communities in the urban forest and in our 2.5 million acres of natural woodlands. Tree size ranges from a few feet in height and width to more than 100 feet tall and wide for the largest tree in Iowa. Tree tops are visible and appreciated; tree roots are not visible, usually misunderstood and certainly not appreciated very much. The root system of woody plants is essential for their survival and growth. Often, the general decline of woody plants is directly related to the health and vigor of their root systems.

The roots of young seedling trees are often classified as either having a tap root (most oaks, walnut and hickory) or having a fibrous root system (maples, ash and cottonwood). The tap root may grow vertically for some considerable distance if soil conditions are favorable. As the root system continues to enlarge with tree growth, the root type becomes less recognizable. Below ground environmental factors including moisture, oxygen supply, soil texture, underground obstacles, other roots and animals determine the ultimate shape and extension of the tree’s root system.

Healthy trees have extensive root systems. Most tree roots are shallow; the majority of roots are found in the top 18 inches of soil. Usually, more than 50 percent of a tree’s roots are in the top six inches of soil. Most favorable growing conditions are in the upper profile of soil; moisture and nutrients are first available near the surface in water and nutrient cycling. Roots extend laterally for considerable distances. Root systems may occupy an area four to seven times the surface area occupied by the crown of the tree.

Root systems are modified by their environment. Soils with higher clay content have less extensive roots than soils that are sandy or better drained. Trees growing in mulches or in a “natural” woodland environment will have more roots closer to the surface than trees growing in turf grass environments. Roots growing in fertile, moist and well aerated soils will be more numerous, less extensive and closer to the trunk than roots in less desirable soil. Roots in sandy soils will be more extensive, less fibrous and fewer in number.

For trees to function at their optimum, as the above ground portion of the tree grows and expands, so must the root system. The relative relationship of the root to the shoot is expressed as the ratio of the weight of the root to the weight of the top. Under normal conditions, this ratio is from 1/5 to 1/6, meaning that the top is 5 to 6 times as heavy as the roots. Another way to view the root system is to consider that a seedling may have 2 to 6 feet of root length while the root system of a mature oak tree may be hundreds of miles in length.

At the point of attachment to the trunk of the tree, there are relatively few roots; these divide and redivide, becoming progressively smaller in diameter until reaching the extremely fine rootlets. Roots have no regular branching pattern like the shoots which develop at nodes from buds in the axils of leaves. Lateral roots arise from tissue on the outside of larger roots. The root cap protects each root tip as it is forced through the soil by elongating tissue just behind the tip of the root.  Just back from the root tip are the root hairs which are fine outgrowths of single cells. Water and nutrients are absorbed through root hairs and by the tips of these smallest roots. Root hairs are functional for a few weeks to two years and then are sloughed off.

Trees can share root systems. If two roots of the same species grow next to each other, as they grow in diameter, they may grow or graft together.  This has implications when trees growing next to each other are infected with vascular diseases that may be transmitted through root grafts.

Healthy trees will have a healthy, expanding root system. As we work with landscape plants, avoid practices which damage or inhibit the growth of a tree’s root system.  Healthy roots anchor the tree, provide uptake of nutrients and water for growth and cooling, provide storage for food reserves and produce organic materials required for tree growth. These vital root functions are vital to a vigorous and functional tree.

There are two photos for this week's column.
RootsAdapt42806.jpg
RootDamage42806.jpg