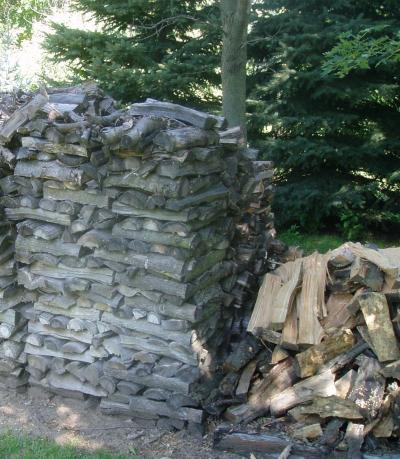 Firewood must be seasoned or dried.  This requires that the wood be cut and stacked for at least a year before burning.

With the sudden surge of energy prices, homeowners will begin looking at alternative sources for home heating. The use of firewood in stoves, furnaces and fireplaces will be considered for home heating by many homeowners. Before running out and buying a new wood stove or chain saw, consider some facts about your wood supply and the effort and resource needed to produce it.

Most species of wood contain approximately the same amount of energy per pound, assuming they are at the same moisture content. Firewood at 20 percent moisture content or air seasoned for at least one year has approximately 7,000 Btu of energy per pound.  Species differences occur in firewood because of the density variation across species. InIowa, basswood weights about 25 pounds per cubic foot and shagbark hickory weighs 51 pounds.

Firewood is often measured and sold by the stacked volume. A cord of wood is a stack of firewood 4 feet by 4 feet by 8 feet or 128 cubic feet of wood and air.  A cord of air-dried basswood weighs a ton and shagbark hickory weighs two tons; therefore, a cord of shagbark hickory has twice the heat value of a cord of basswood.

Firewood must be seasoned or dried. This requires that the wood be cut and stacked for at least a year before burning. The average wood usage in Iowa for home heating is three to seven cords per year.

Using firewood for home heating requires a good supply of firewood. A few trees in the backyard are not sufficient. Most woodlands in Iowa are capable of producing or growing up to a cord of wood per acre per year with good management. Firewood burners should have a minimum of 5 to 10 acres of a well-stocked (land fully occupied with trees) and well-managed woodland to provide the fuel for heating the average home.

If the homeowner is planning on using wood as an alternative source of energy, consider all aspects of wood burning including the cost of the stove and installation, supply of wood, production cost including equipment such as chainsaw, splitter and pickup, storage of the wood, planning at least a year ahead of time, and the hassles of feeding and tending the wood burning equipment.

Burning wood can have impacts on the environment through smoke pollution outdoors, indoors and damage to the woodland or forest through unwise practices. It is safe to say that if wood from a sustainable managed forest is properly processed, dried and burned in a properly installed and maintained efficient wood burner, the environmental impacts will be minimized.

A good Web site for learning more about wood burning is: http://www.woodheat.org/

Two high resolution photos  suitable for printing are available for use with this week's column:
WoodStove101405.jpg
StackedWood101405.jpg