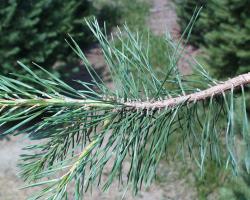 The red pine is one of three types of pines often seen in Iowa.

The term “conifer,” which describes most of the evergreen trees that are so familiar in the Iowa landscape, includes several species that can be distinguished by a variety of their characteristics, including needles, cones and bark. Is it a pine, a fir or a spruce tree? Following are tips that can be used to identify which is which.

To tell spruce and fir trees apart, it helps to know that spruce needles are sharply pointed, square and easy to roll between your fingers. Fir needles, on the other hand, are softer, flat and cannot be rolled between your fingers. Spruce needles are attached to small, stalk-like woody projections. When needles are shed, these projections remain. As a result, the branches of spruce trees feel rough. Fir branches lack these projections, and thus have smooth bark. The color and length of needles are not reliable means of identification; these can vary from tree to tree, depending on cultural conditions and the planting site.

Cones
All conifers produce cones, which are incorrectly called pinecones since not all conifers that produce cones are true pines. Cones are made up of scales attached to a center stalk. In between the overlapping scales the seeds can be found. The scales on the cones help us identify the various species. Pinecone scales are woody in nature, with a rigid feel.  In contrast, spruce cones have thinner scales than pinecones, which gives them a more flexible feel.

The length of cone is not a reliable way of differentiating most types of conifers because the length can vary from tree to tree. For example the sugar pine cones range in size from 8 inches long to more than 26 inches long.

Bark
Bark alone is not a fully reliable indicator of the type of conifer you have. The surest way to identify conifers is to examine the needles and cones along with the bark. In general the bark of pine trees is smooth on young trees but develops a flaky, reddish-brown color with age. Scots pines have a particularly orange/red peeling bark. White pines can have smooth bark, even when mature. The bark on spruce trees is generally rough to touch and becomes furrowed and scaly with age. Fir trees have smooth bark that is often grayish when young, but develops a furrowed appearance as it ages.

Needle Drop
All conifers shed needles -- sometimes this shedding is slow, but most commonly it occurs all at once in the fall. Because the oldest needles are shed, the "inner" areas of the tree closer to the trunk become less dense than the outer areas.

For example, pine trees tend to keep one to three years of needles active, and in the fall the older needles turn a yellow-brown before they are shed. The pine species showing the most brilliant color change in most years include white, Austrian and Scotch. The color change is also noticeable on arborvitae and sometimes spruce and fir. This color change occurs each year, but some years it is more eye-catching.

As long as the color change is in the inner portion of the tree and in the fall, the homeowner should have no worries. If the needle discoloration is on this year's growth or at a different time of the year than fall or winter, then you should send some samples into the disease clinic to see what is happening. So instead of worrying, enjoy the brilliant yellow fall color of your conifer trees.