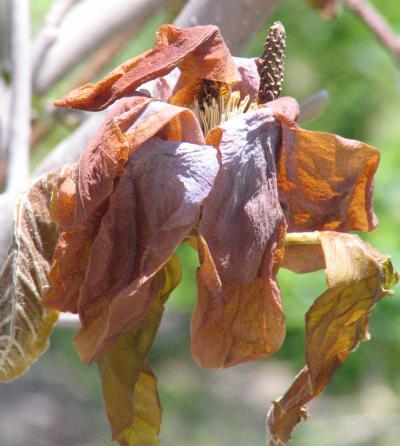 This spring's unseasonably warm weather in late March and the first three weeks in April encouraged many trees and shrubs to leaf out earlier than normal. Newly emerged growth is quite succulent and susceptible to damage from strong winds and below freezing temperatures.

The extent of plant damage is dependent on several factors.  These factors include temperature, plant species, exposure, and stage of plant growth.

Symptoms
Symptoms of freeze damage include shriveling and browning or blackening of damaged tissue.  Damaged growth often becomes limp.  Eventually, damaged or destroyed leaves may drop from the tree or shrub.

Prognosis
Fortunately, trees and shrubs have the ability to leaf out again if the initial growth is damaged or destroyed.  Healthy, well established trees and shrubs should not be greatly impacted and will produce additional growth within a few weeks.  Trees and shrubs planted within the past 3 to 5 years may benefit from a light application of fertilizer and periodic watering during dry weather.

The prognosis for freeze-damaged perennials is also good. While the freezing temperatures damaged the perennial’s foliage, their crowns and roots were not harmed.  Damaged perennials will send up new growth within a few weeks.