Hen and Chicks: A Kaleidoscope of Leaf Shapes, Textures and Colors 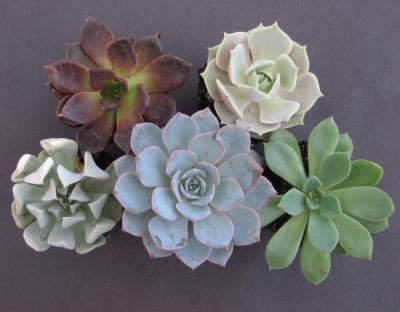 Echeveria plants, commonly known as Hen and Chicks, have leaf colors of green to blue, purple to pink and even gray.

The shape and arrangement of succulent plant leaves can add both ornate interest and unique texture to your summer garden.  Hen and Chicks (Echeveria) is a succulent annual native to the mountainous regions of Mexico and northern South America. The first species of Echeveria were discovered by and named after an 18th century Spanish botanist, Atanasio Eheverria Codoy.

The plant’s well-known common name, Hen and Chicks, was derived from the vegetative offsets, or new plants that mature Echeveria will produce. The mature plant, the hen, develops numerous offsets, chicks, which surround the mature plant until the offsets are mature enough to support themselves.  In nature, the offsets break away from the hen once they are mature, but they can also be pulled or cut off and transplanted in the home garden.  The hen actually benefits from the removal of offsets since much of its energy is used to supporting the chicks.

The genus Echeveria belongs to the Crassulaceae plant family making it a close relative of the genus Sempervivum that is also known commonly as Hen and Chicks. The equal use of the same common name can lead to some confusion between the two plants. However, Sempervivum is native to southern Europe and the Mediterranean islands, not the Americas. The two plant genera also differ in winter hardiness. Echeveria is hardy to Zones 9 to 11 while some Sempervivum is hardy to Zone 4 making them appropriate in regions of Iowa.

Due to its succulent nature and lack of winter hardiness, Echeveria is best used as an annual and can be added to container gardens, mixed borders or rock gardens. Grouping a variety of Echeveria cultivars together is an ideal way to display the diverse leaf shapes and forms. It is important to provide Echeveria with full sun yet water sparingly since these plants prefer dry soils.

View over 2,240 Echeveria plants in the South Field Display Garden at Iowa State University’s Reiman Gardens. The plants fill the surface of a 6-foot circular globe of the world using eight individual cultivars to represent the seven continents and the oceans of the world.

There is one suitable photo for use with this column: Echeveria1_52605.JPG