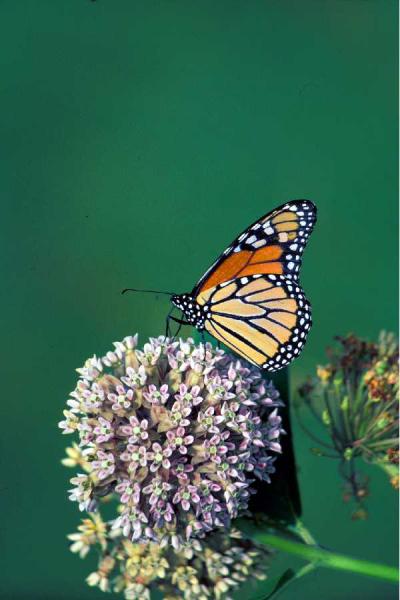 The monarch butterfly is one of the more than 450 insects that feed on the common milkweed.

Plants can be interesting, especially if you enjoy seeing them eaten by insects. One of the fascinating features is the incredible diversity of insects that can feed on one kind of plant. Our understandable obsession with a few serious insect pests on a relatively small number of crop plants skews our view of the insect/plant relationships around us. Most of life, especially the insect world, is much more complex than we realize or admit.

For example, if you were asked to name an insect that eats the common milkweed plant, you would probably name the one that is “in the news” as they say. The well known orange-black-and-white butterfly called the monarch develops from caterpillars that survive on milkweed foliage and no where else.

The monarch butterfly is just the tip of the ecological iceberg. A study of milkweeds by Patrick Dailey of Lewis and Clark Community College, Godfrey, Ill., reported an astonishing 457 different kinds of insects found on milkweed plants. Some of these were eating the foliage, stems or roots and some were visiting the flowers for nectar and/or pollen, but many were considered temporary visitors, proving that even with insects, everyone has to be somewhere.

Common Pests of Common Milkweed
Milkweeds are native, perennial plants named for the white, milky juice that exudes from broken or cut leaves and stems. Milkweeds are found throughout the United States in open, sunny areas. The common milkweed (Asclepias syriaca) has broad, leathery leaves oppositely arranged on stalks 3 to 5 feet tall.  Brownish-purple flowers form a dome-like cluster at the top of the plant and give way to warty seed-pods in late summer, each containing hundreds of tiny seeds attached to a silky tuft of fuzz.

You would have to look at milkweeds for a long time to find 457 different kinds of insects. But with just an occasional inspection of a cluster of milkweeds in your garden, fence row or roadside you should be able to find the following four common species.

Monarch butterfly caterpillars may not be the most abundant insects on milkweed but they are the best known. Monarch caterpillars start out very small after emerging from pin-head sized eggs laid on the leaves by female butterflies. They have alternating yellow, white and black rings around the body and a pair of long, thin, black tubercles at the front and rear. Caterpillars take 2 weeks or more to grow to 2 inches and then they perform the magic of metamorphosis, transforming from ugly caterpillars into pretty butterflies.

The appropriately named red milkweed beetle is the most common of many beetles that feed on milkweeds. These attractive insects are slightly more than one-half inch long and red with 11 black spots scattered along the back. The red milkweed beetle larvae live in milkweed roots from late summer until the following July. Adults aggregate on leaves and flowers and are very common in the second half of the summer.

Finally, while examining the milkweed plant for insects, look closely at the stems and undersides of the leaves, especially at the top of the plant. There you are likely to find milkweed aphids.  There are at least four common species of aphids on milkweed, but the most frequently observed is the yellow milkweed aphid. Large colonies of mixed sizes of these brilliant yellow insects are common. Look closer. Some aphids have wings, most don’t, and there may be ants tending the aphids.

So what does all this mean to the milkweeds? Probably not much, though large numbers of predators eating leaves, stems, flowers and roots of plants might help regulate weed populations. Not that I’ve noticed much decrease in my neighborhood. Are insects on milkweed a problem? Not unless you are trying to raise milkweeds!