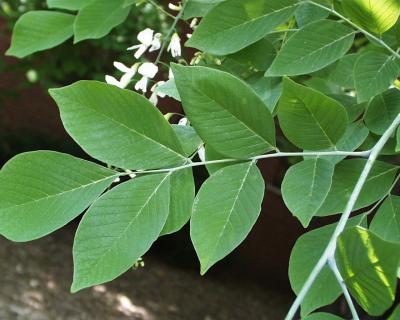 The compound leaves of a Yellowwood tree grow darker green from spring to summer.

A common subject in urban forestry and landscape design is the need to diversify the planting site with different plant species. This is done for the most part to prevent large-scale disease and insect damage. For example, planting the same tree species down a city block is very attractive. However, every tree on that city block could be lost if a new pest moved into the neighborhood. That problem became very evident with the introduction of Dutch elm disease and the bark beetles that carry the disease.

A good landscape plan has several layers of plant diversity. For example, grasses, annual/perennial flowers, shrubs, small trees, and large shade trees complete the different layers to make the site aesthetically pleasing. As a forester, I deal largely with the large shade trees and smaller accent trees. Each year I get asked the same question by landowners around Iowa, “What is the best low growing tree to plant?” There are many great low growing trees for Iowa’s urban communities; however there is one species that typically gets over looked because of its rarity. That tree is Yellowwood (Cladrastis lutea).

Yellowwood is not a native tree to Iowa. Its native range is from North Carolina to Kentucky with a few native patches as far west as Illinois. Andre Micheaux, a French botanist, discovered the Yellowwood trees growing near Fort Blount, Tenn., in 1796.

This tree is extremely rare and difficult to find in the wild and in nursery production. In fact, it is on the endangered species list for many states.

The tree received its name from its heartwood, which is a deep yellow color that was at one time used to manufacture yellow dyes. Yellowwood grows to an average height of 30 feet and spreads out just as far. The trunk tends to fork very low sending out several branches covered with a smooth smoky gray colored bark. The compound leaves are a bright yellowish green color in the spring and turning to a darker green in midsummer.  The real prize occurs every other year when it flowers. The flowers are a perfect white and very fragrant. The flowers appear in early June growing on their own stems that range in length from four to sixteen inches long, a stunning display for anyone’s yard.

Yellowwood is part of the pea family, so it does produce a small brown seedpod in mid-October that is two to four inches long and less than an inch wide. Unlike most members of the pea family, yellowwood does not fix atmospheric nitrogen (take nitrogen out of the air and affix it into the soil).

There are very few disease and insect problems with yellowwood. In fact, the only reported disease in Iowa is a wilt fungus that is rarely found on this tree. Pruning needs tend to be the biggest setback with this species. Pruning should be done only in midsummer because the tree “bleeds” profusely if pruned in the spring and tends to crack if pruned during the winter months.

Despite the numerous positive characteristics, there are a few things to keep in mind.  Yellowwood in considered by most people to fit into the USDA Hardiness Zones 5-8.  Most of Iowa is Zone 4 with roughly the southern third in Zone 5. However, there are several yellowwoods planted at the Minnesota Arboretum and a few on the Iowa State University campus. Nonetheless, the tree should be planted in a site that is somewhat protected from the elements. In addition, it is a shade tolerant tree, so plant it near the east side of a building or underneath any established shade tree to help protect it from Iowa’s heat.

Finally, yellowwood grows well on high and low pH soils making it just another ideal low growing accent plant to add to your yard. The real challenge is finding this tree in your local nursery, but it is worth the hunt.

Three color photos, suitable for publication, are available:
yellowwood1.jpg [925 kb]: A Yellowwood Tree, such as this one on the Iowa State University campus, can grow to a height of 30 feet.
yellowwood2.jpg [450 kb]: Yellowwood Trees produce long stalks of fragrant flowers in early June.
yellowwood3.jpg [450 kb]: The compound leaves of a Yellowwood tree grow darker green from spring to summer.