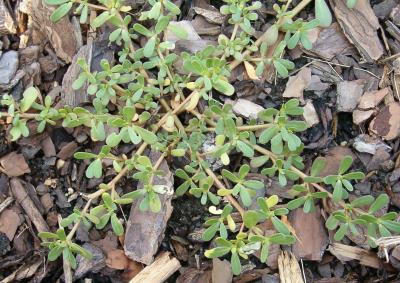 Purslane is a common and persistent garden weed because a single plant can produce 52,000 seeds and broken off stem pieces will develop roots and continue to grow.

On the popular reality television show “Survivor,” contestants are eliminated from the competition by others until only the winner remains. If a group of herbaceous plants were put through a comparative competition, it is very likely that a weed species would win the million dollar prize. The reason is adaptability. The common weeds that invade our landscapes share a similar characteristic – their ability to adapt and thrive in man-influenced habitats.

Almost any plant can be considered a “weed,” even those we cultivate as crops or ornamentals, if they are able to survive and successfully reproduce or spread in the new environment. Volunteer corn growing in soybean fields, aggressive groundcovers and tree seedlings that sprout in the garden are considered weeds because, by definition, a weed is simply a “plant out of place” or an invader.

Some plant species become weedy pests because they possess specific attributes or characteristics that allow them to succeed and thrive in disturbed areas.

Ability to survive in cultivated soil
Many annual weeds, such as crabgrass, purslane, common ragweed, lambsquarter and redroot pigweed, produce an abundance of seeds. According to a former weed specialist from North Dakota, one common purslane plant will produce 52,000 seeds! If only a few seeds produced by that plant grow to maturity and set seed, there would be more than enough to create a serious weed problem in a garden or field for years to come. Because of this, it is important to control annual weeds in gardens and lawns before they flower and set seed.

Another survival mechanism many weeds possess is the survival of its seed. Seeds of many weed species can survive and remain dormant in the soil for several years until conditions are favorable for germination. For example, seeds of common ragweed can survive nearly 40 years in undisturbed soil. Only a portion of the seeds in the soil germinate each year, leaving a reserve for future years.

Some of the worst weeds to control in cultivated areas are those that spread by underground perennial roots or stems, such as Canada thistle and quackgrass. Tilling areas infested with these pests quickly multiplies their numbers because broken root or stem pieces have the potential to become new plants. These plants are best controlled with spot treatments of a non-selective herbicide, such as Roundup®, that kill the entire plant, roots and all.

Competitive ability
Many weed species grow rapidly and shade the less vigorous, cultivated plants. The lack of adequate light causes poor crop growth and production.  Some weed species are also greedy when it comes to soil nutrients and water, shorting our cultivated plants of these essential items.

Ability to tolerate unfavorable habitats
Some plants, such as knotweed and plantain, can tolerate compacted soil where turfgrass won’t grow.  Seeds of drought and heat tolerant weed species germinate and grow in very adverse places, such as cracks in sidewalks.

Ability to withstand repeated cutting or mowing
Despite frequent mowing, weeds in lawns and pastures are able to survive because they avoid the mower blades with their low stature or sprawling growth habit. Also, some species, such as dandelions and crabgrass, are often able to bloom and set seed between mowings.

Don’t let weeds become the last “Survivor” in your lawn and garden. The best way to compete with weeds is to prevent them from becoming established. This can be accomplished by learning more about the life cycle of common weeds and using the most effective control strategy for each species. In gardens and landscapes, weeds can be controlled by mulching, frequent cultivation or hand weeding. Prevent weeds from invading your lawn by maintaining a thick, healthy turf so that there are few bare spots where weeds can germinate and grow. If herbicides are used, the appropriate product should be applied when the weed is most vulnerable to that product and there is minimal risk to non-target plants and the environment.

One print quality photo is available for this week's column: 8505purslane.jpg