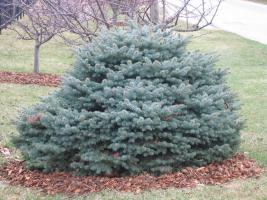 Dwarf Blue Spruce makes a great focal point in the garden, as a foundation planting, or even as a specimen in a mixed border.

Since its introduction in 1862, the Colorado spruce has become a landscape staple across much of the United States. Its numerous cultivars provide gardeners with almost any desired growth habit, which make it a versatile planting option for year-round interest.

One of the most common cultivars is the dwarf blue spruce (Picea pungens 'Globosa'). This attractive, slow-growing conifer has many attributes that make it an outstanding addition to any landscape or garden.

Dwarf blue spruce is adaptable to a wide range of growing conditions and is hardy to USDA Hardiness Zone 3 (-40 to -30 degrees F) to 8 (10 to 20 degrees F). It prefers a well-drained to dry soil due to the high elevation of its native habit in the western United States but can easily adjust to most soil types. Its coarse, blue-gray needles are extremely vibrant, especially during spring when new shoots (or candles) break, releasing a flush of soft light blue foliage that remains throughout most of spring and summer. The growth rate of Picea pungens'Globosa' is quite slow, averaging only 1 to 6 inches per year (3 to 6 feet in 10 years) classifying this conifer as a dwarf.

Maintenance of dwarf blue spruce is minimal. It requires very little attention, except for regular watering during establishment, and selective pruning to control height and habit. Like most plants, dwarf blue spruce benefit from 2 to 3 inches of organic mulch such as shredded bark or composted leaves.

Like most selections and cultivars of Colorado spruce, propagation is accomplished during the winter by grafting new growth of existing plants onto seedling understock of the same species. If grafted onto a taller understock or a standard, the result is a plant with a single-stemmed topiary appearance.

Several other cultivars of dwarf blue spruce are available, including P. pungens 'Montgomery' and P. pungens 'Glauca Globosa.' These cultivars share similar attributes such as growth habit and color, often causing confusion not only in the landscape but also in the nursery trade.

Dwarf blue spruce is quite versatile in the landscape. It makes a great focal point in the garden, as a foundation planting, or even as a specimen in a mixed border. Additionally, if grown as a standard, a matching pair can create a year-round formal addition to a home's entryway.

BlueSpruce.jpg (488K): A color photo, suitable for publication, is available.