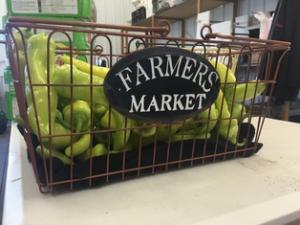 This past weekend Region 5 interns, Cali and I (Jade), spent our Saturday morning down at the Sioux City Farmers Market and we had a blast! We had a food tasting for the consumers that were shopping around the market as well as additional informational flyers. The recipe that we decided to do for the food demo is called Summer Bounty Salad that we retrieved off of ISU Extension & Outreach's website Spend Smart Eat Smart. After arriving at the market and setting up, Cali and I went around the market and bought a variety of vegetables from different vendors that we would use to create the salad. Some of the ingredients that we bought were: carrots, broccoli, onion, peas, and tomatoes. As we were preparing the vegetables many people began to stop by our tent and ask us what we were making, so we would explain the recipe and hand out copies of the recipes to those that were interested. After completing the salad Cali and I started serving them into sample size cups and handing them out to people. The salad was such a hit! People would stop by and tell us that they had heard some people at the other end of the market talking about how amazing it was so they had to also stop by and try some. Believe it or not, the people most willing to try the Summer Bounty Salad was the kids. Overall it was an amazing experience! If you're interested in going to the Sioux Cities Farmers Market it is located down by the Tyson Events Center in Sioux City and is open Wednesday & Saturday 7:30am-1:00pm. Below is the Summer Bounty Salad Recipe for those interested in trying it!