Moles in the Yard

Moles are a common problem for most homeowners. They are ground dwelling mammals that create unsightly tunnels throughout the yard and garden that can make mowing difficult, as well as damage the roots of the lawn.

In order to take care of a pest you have in your yard it is important to properly identify them. In Iowa we have one species of mole, the Eastern Mole (Scalopus aquaticus). They are incredibly common throughout the entire state of Iowa. The reason moles tunnel underground is because they are fossorial. They are animals that are adapted to burrowing and live their entire lives underground. They have soft and brownish to grayish fur, nearly non-existent eyes, a pointy snout, and massive front paws that act as shovels as they tunnel throughout the ground. They are small mammals and can often be confused for a mouse or shew when seen. Moles prefer moist, sandy loam soils, in forests, pastures, fields, and lawns. The sandy loam is easier for the moles to maneuver.

Moles have a very large appetite. They consume nearly 80 percent of their weight daily by eating insects, grubs, small vertebrates, and vegetation on occasion. Because of this, moles are constantly burrowing for food. According to the Mammals of Iowa Field Guide, “In good conditions, a mole can dig up to 15 feet of tunnel in an hour. What may look like an infestation of moles is almost certainly only one or two active moles feeding over a wide area.” Some tunnels are a temporary structure to use as travel lanes before digging their deep, permanent tunnels and nest cavities. The site of mole tunnels is a big indicator of an abundant prey source.

There are a few control options for moles. One cultural method would be to attempt to eliminate the mole’s source of food. This can be done by using certain insecticides to control the organisms. This could cause the moles to leave the area, but not without additional damage. Moles may increase their digging in search for food which could cause more damage to your yard. 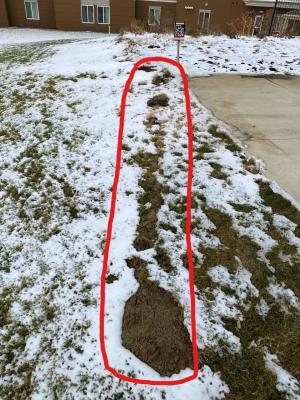 The best option when controlling moles is trapping. It is the most effective and safe method. However, it does take a lot of patience. The two traps you may find at hardware stores would be a scissor-jaw trap or a harpoon trap. It is always important to follow the instructions that come with the trap for safety, and for the best results.

Before anything, it is important to know that moles can be highly beneficial to your yard. They aid in soil aeration, fertilization, and feed on harmful pests, such as “white grubs”. Removing a mole could increase the number of pests resulting in another mole moving in. Sadly, this leads to an ongoing removal process. For more information on burrowing animals, visit https://naturalresources.extension.iastate.edu/wildlife/diagnosingholes-yard.