Heirloom tomatoes are the hit of the summer. There are a variety of colors, shapes, and flavors of heirlooms that many like to enjoy. However, how to heirloom tomatoes get their name?

Heirloom tomatoes are a vintage style tomato that have been passed down from generation to generation. Similar to a family heirloom that has been passed down, but instead of a ring or a piano it’s seeds of a delicious tomato. Some varieties are 50-100 years old, but some may be even older than that! All heirlooms are open-pollinated and usually breed true-to-type. Meaning seeds of heirloom tomatoes can be saved year to year to stay in production. 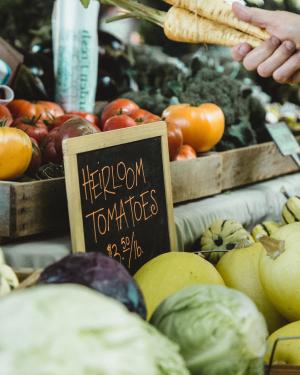 Photo by Dane Deaner on Unsplash

Heirlooms were often selected for flavor potential and eating quality. Over time vegetable breeding emphasized hybrid varieties bred for uniformity in size, shape and ripening, as well as for durability in shipping. That being said, heirloom tomatoes maybe aren’t the most pretty looking tomato on the market in comparison to tomatoes hybrids you might find in the store, but they have a lot of character. Heirlooms come in a variety of shapes and sizes. I’ve seen some that have been the size of my head with lumps and bumps of flavor. They are incredibly interesting to see and taste.

Trying new varieties of heirlooms can be something fun to do this summer! Visit a local farmers market in your area to visit with producers to learn more about the varieties they have picked to grow. They may be able to speak to the flavor and texture of the tomatoes they are selling. Don’t be afraid of a tomato with a little character; it might just be your new favorite! To find a farmers market near you visit: https://www.idalsdata.org/fmnp/index.cfm?fuseaction=main.formFarmersMarketDirectory.