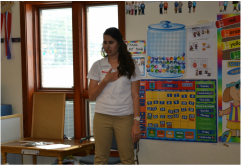 The interns have all been busy working on their individual projects throughout the summer.  I (Carissa) spent my summer planning, preparing, and presenting a "Healthy Eating for Kids" workshops to youth in 5 counties:  Lyon, Osceola, Dickinson, Clay, and Sioux.  I gave my workshops at a day care, libraries, and in 4-H youth programs.

I had so much fun giving these workshops!  The workshops consisted of 5 fun activities pertaining healthy eating and focusing on fruits and vegetables. Each workshop started with an introduction activity, “I’m Going on a Picnic”. The youth selected a fruit or vegetable that started with the first letter of their first name. They would say “My name is [name], and I am going on a picnic. I am going to bring [fruit or vegetable].” The whole group would repeat their name and what they were bringing on the picnic.

Then I talked about MyPlate.  I explained how plates should contain half a plate of fruits and vegetables and encouraged them to eat a balanced diet of a variety of fruits and vegetables. The next activity was a fruit and vegetable color sorting activity.  During this activity, each child was given a 2D food model. Using brown paper bags labeled with red, orange, yellow, green, blue/purple, and white the children sorted the food they were given into the color group that corresponded. The backs of each bag had the list of benefits that I explained.  After the color sorting activity, we played “Fruit and Vegetable Jeopardy”.   The groups all enjoyed playing this game and learned new things about fruits and vegetables.

Participants’ favorite part of the workshop was always the food tasting. Cherries, orange peppers, apricots, broccoli, plum, and cauliflower were brought for the food tastings.  At the end of the workshop, I asked the youth  to raise their hands if they tried something new, what it was, and if they liked it. Many of them tried new fruits or vegetables. Their favorites to try were the cherries, orange pepper, apricot, and plum. These were foods many had never tried before. They were also asked if they would be more willing to try new fruits and vegetables at home. Many of them raised their hands to answer “yes” to both of these questions. Some youth asked for more of the samples to eat after!

I had so much fun giving these workshops this summer.  All the groups of youth were great and made each workshop different and exciting.  I hope they all learned something new and enjoyed the workshop as much as I did!