Climate Change is a tough topic to address with any group of individuals. However, it is something that is affecting all of us, and it is especially affecting our growing season.

We hear about rising sea levels and melting ice packs often, but what about agriculture and gardening? What is going to happen to our farmers in the Corn Belt? Iowa is lucky since we are landlocked and have no major threat of our land going underwater, but that doesn’t mean we won’t feel the impacts of climate change. In fact, we already have. Let’s focus on two big points: temperature and precipitation. 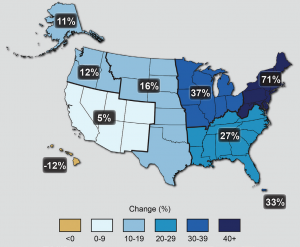 Something that affected a majority of Northwest Iowa recently was massive flooding that occurred when a warm front moved in causing storms and melting of the packed snow. Areas are still in the process of cleaning up from the disaster, and many farmers are still waiting for their fields to dry. Precipitation is a major factor in climate change yet is the least discussed. When we hear “climate change” people often get it confused with “global warming”. The warming temperatures are increasing the growing season. We are moved into a Zone 5a meaning our average annual extreme minimum temperature has increased over time. Our frost-freeze dates are also becoming earlier and later. These shifts in climate have changed our growing season length by nearly two weeks.

Global warming factors into climate change, but there’s a lot more to climate change. Sure, maybe having a warmer winter sounds great, but warmer summers don’t. With the warming temperatures that have been tracked researchers have found that the warmer weather is bringing more precipitation. Warmer air is able to hold more water. In an article titled Climate Change Impacts in the Corn Belt, author Dennis Todey wrote, “Consistent with long-term climate model projections, precipitation intensity also has increased, resulting in more precipitation occurring in larger events. These events often are detrimental to agricultural production, leading to increased soil erosion, flooding and other structural damage.”

So, what does this mean for growers? It means that we need to be flexible. Things are changing and we have already taken steps to adjust our methods to produce the necessary yield. Extension professionals, professors, farmers, and more have been working together to understand what is happening to the growing season. Read more about climate and agriculture by visiting the ISU Extension store website (https://store.extension.iastate.edu/Topic/Environment/Climate-and-Agriculture?S=0&A=0&F=0).