Energy is supplied to the horse via the diet but fundamentally energy is not a nutrient. Horses need energy to carry out their body’s essential daily functions, including the digestion and absorption of food, activity, growth and reproduction. The total energy contained in a feed is called gross energy (GE). The GE of a feedstuff is not a good indicator of the energy available to a horse from a feedstuff. Thus, with horses, we use digestible energy (DE) which is GE minus the energy contained in feces. Digestible energy is expressed in Mcal which is a multiple of the unit of energy calorie. Table 1 lists the DE of common feed ingredients in horses’ diets. In general, cereals provide more DE than hay. Vegetable oils contain more energy than cereals (~2.5 times as much DE as corn and three times as much as oats). 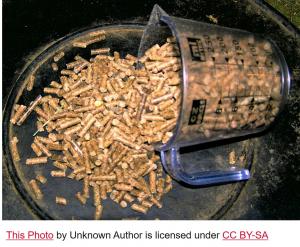 Processing includes cold processed (rolled, ground, cracked) or hot processed (crimped, pelleted, extruded, steam-flaking, and micronized). Rolling passes the grain between a closely fitted set of smooth rollers. Crimping uses rollers with corrugated surfaces. Steam-flaking subject’s grains to steam for various periods of time. Steam-flaked grains are usually less dusty than dry-rolled grains. Pelleting uses ingredients which are ground and then steam heated. Next the mash is pushed through a pellet die to obtain the desired size, cooled and dried to prevent mold growth. The ingredients for extruded feeds are grinded, mixed and the resulting mash is cooked using a combination of high temperature and pressure. Extrusion die nuggets or cubes are then cooled and bagged. Micronizing heats the grain using infrared heat until all moisture is vaporized. This ruptures the endosperm of the grain causing the starch to be reconfigured. Immediate flaking further reconfigures (gelatinizes) the starch which enhances the digestibility and nutritional value of the feed. The goal with all the types of processing is to increase the digestibility of the feed ingredient in the small intestine, thus lowering the amount of indigested starch entering the hindgut. Safety and energy value of the feed greatly increases with processing.

Feeding horses depends to a large extent on the relative proportions of the energy sources provided to the horse and the feedstuffs used. Energy required per day is influenced by body condition; physiological status (age, breed, production); duration and repetition of work; environment, metabolic efficiency and presence of any nutritionally related disease. 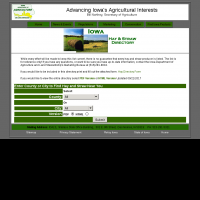 Fats and oils are made up of triglycerides that each consist of a glycerol molecule to which three long chain fatty acids are attached. Fats and oils are the same compounds nutritionally; oil at room temperature will be a free-flowing liquid, whereas fat at room temperature will be solid. Fats/oils are digested in the small intestine of the horse and are a concentrated source of dietary energy, providing approximately 2.25 times more energy than an equal weight of digested carbohydrates.

Forages as hay or pasture make up the significant share of the daily intake of a horse. Horses are natural grass eaters with front teeth suited for biting off the grass. The molars chew and grind bulky feed, such as hay and coarse grains. A mature horse that is not working hard will eat 1.5 to 2 pounds of air-dry feed per 100 pounds of body weight. That would be 15 to 20 pounds of hay daily for a 1,000-pound horse. In Iowa, horses will require about 2 tons of hay per head per year plus summer pasture. When meeting nutrient requirements, carefully consider forage quality and nutrient content.

Anatomical features of the mouth include the teeth, tongue and salivary glands. Digestion of feeds begins when food enters the mouth. The horse chews reducing feed particle size and mixing it with saliva to begin the digestive process. Saliva acts as a lubricant to provide easier passage through the esophagus and buffers acid in the stomach. Once swallowed the bolus of feed moves from the esophagus to the stomach.

The stomach of the horse is the smallest unit of the digestive tract with a capacity of approximately 2-4 gallons, comprising around 10% of the total volume of the horse’s digestive tract. The horse has the smallest stomach in relation to body size of all domestic animals. Due to the small capacity, smaller, frequent meals are recommended. The stomach’s main functions include mixing, storage and controlled release of feed into the small intestine; and secretion of pepsin to begin protein digestion. Very little absorption of nutrients occurs in the stomach. Once feed is released from the stomach it enters the small intestine.

The horse’s small intestine is approximately 70 feet long, comprising 30% of the total digestive system. The passage of feed through the horse’s small intestine is rapid, moving at approximately 1 foot/min and delivering the digesta to the cecum in as little as 45 minutes after a meal. volume of feed consumed and rate of passage affect digestion and absorption of nutrients – larger volume and increased rate of passage will decrease digestion and absorption

The digestion of oils and protein is extensive in the small intestine. The digestion of starch can often be incomplete due to the starch present in cereal grains being protected by the grains seed coat. If starch is not digested in the small intestine it will be delivered to the hindgut where it will be rapidly fermented by bacteria, causing lactic acid production and accumulation, hindgut acidosis and diseases such as colic, metabolic acidosis and laminitis/founder.

The hindgut of the horse comprises the cecum, large colon, small colon and rectum. The cecum consists of 12-15% of tract capacity and the colon 40-50% of tract capacity. The major functions of the hindgut are the microbial digestion (fermentation) of dietary fiber (structural carbohydrates primarily from forages in the horse’s diet). Important end-products of the fermentation are volatile fatty acids (acetic, propionic and butyric) which can serve as an energy source for horses fed mostly forages such as pasture or hay. Fermentation also produces methane, carbon dioxide and water, as well as most of the B-vitamins and some amino acids. Another function of the hindgut is water reabsorption.

The diet composition affects the makeup of the microbial population. When starch is delivered to the hindgut the starch fermenters (amylolytic bacteria) begin to rapidly ferment the starch, producing large quantities of lactic acid and volatile fatty acids (VFA). Because of the acidic nature of these products of fermentation, the pH in the hindgut begins to fall. A low pH favors pathogenic bacterial which can then contribute to serious diseases such as, laminitis or founder, colic, endotoxemia and metabolic acidosis.