-Stewardesses can be mean and under appreciated at the same time

-Sleeping on planes is hard..... except for Jacob Baker

I may have jokingly told a few of you that we crash landed in the Amazon and we forced into dangerous pit fighting with Jaguars.  Sadly/ thankfully (based on your views) this did not occur and all our flights went of without a hitch.  We were able to see many cool things above the clouds and other such pleasures of flying, ear popping included. Leaving Des Moines for Atlanta was a nice warm-up in my opinion for the 9 hour flight from Atlanta to Sao Paulo.

Personally I was off to a great start with the culture shock as I walked on to our international flight. Beginning with the stewardess kindly asking through a thick accent, "Are you Brazilian?" Not fully hearing/understanding her I enthusiastically replied, "Yup", which confused the poor lady.  Everything was quickly cleared up when she spoke slower and more clearly, but I was definitely not off to a good start as far as the stewardesses were concerned (I'll get to that later).

Sleeping on the plane was a nightmare and a half, I might have gotten a grand total of 3 hours of sleep on a nine hour flight. Andrew Benning was able to get a similar amount, while Jacob Baker, the last person in my particular row, was able to sleep almost the entire trip down.

The morning as we neared Sao Paulo, I thought it was a good time to start practicing my Portuguese with people. To do this I was going to start by ordering a simple cup of black coffee. The exact phrase I needed to say was " Cafe, por favor", then smile and say "Obrigado" (Coffee, please..... Thank you), but what came out was some nervous combination of English and Portuguese.  So the first stewardess looks at me like I'm an idiot and goes on with serving coffee, In an attempt to redeem myself I collect myself and say, in what I believe to be perfect Portuguese, and the second stewardess looks at me and says, "You can't speak English, you can't speak Portuguese. I speak 5 different languages and you are making nonsense, now would you like coffee or not?" Needless to say it was a short "Yes, Ma'am" and I drank my coffee in silence.  Shortly after that we landed in Sao Paulo and that's when the real adventure began......

P.s. Here are a few pictures for those who enjoy them, they may be slightly rotated incorrectly.

At 3:00 am eastern time we were crossing over the Amazon Jungle, if we crashed at this point we surely would have needed to fight off Jaguars

First cracks of light of a Brazilian sunrise from the plane 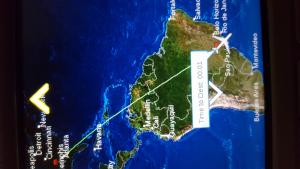 Final approach into Sao Paulo, we made it.