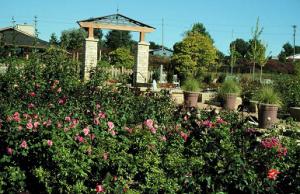 Early on in the development of Earth-Kind® research, Dr. George, founder of Earth-Kind®, decided that roses, because of their need for a high level of maintenance, would be the flagship plant of Earth-Kind® trials. In 1996 Dr. George contacted Iowa State University’s Reiman Gardens and Dr. Buck’s widow Ruby, and requested permission to come to Ames and collect rose cuttings from the garden and Buck family collections. This was for the first Earth-Kind® rose trial and was because of the known winter hardiness and disease resistance that many of the Buck roses possess. Carefree Beauty, considered Dr. Buck’s most successful variety, was to be the control plant in all trials ultimately making it the rose all others were to be compared.

Since 1996, 23 rose varieties have been identified as Earth-Kind®. This was done by first careful selection of rose varieties for university trials based on previous trial data and recommendations from industry leaders.

These initial trials consisting of 100 varieties, used Earth-Kind® planting and maintenance protocols and were planted in a random block design. Evaluation was completed on a monthly basis for three years beginning the second season. Roses that performed well in the first trial were then trialed again for an additional 2 years by master gardeners in public parks and public and private gardens. Using the same planting and data collection methods as done in the university trials, data was collected and the varieties that performed well were named Earth-Kind®.