Growing up in Iowa, Jason Ross came to appreciate agriculture and swine production at a young age. His family farmed near Grinnell and raised swine, and during his time as an undergraduate at Iowa State University, he worked for swine producers near State Center.

“When I was a student, I got immersed in every phase of swine production,” said Ross, who now works as director of the Iowa Pork Industry Center at Iowa State. “I did everything from washing barns to daily sow herd care, reproductive management, farrowing room management, piglet processing and nursery care.”

In 2008 he was hired as an assistant professor in animal science at Iowa State, and in 2015, he became director of the IPIC. 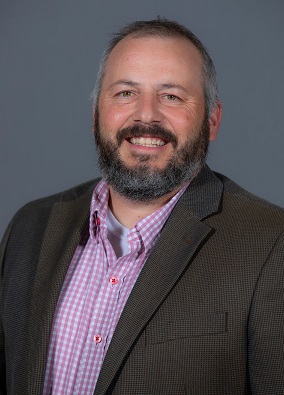 Iowa is the nation’s leader in pork production, and Ross said it’s critical that pork producers and consumers have the information they need to produce food that not only feeds Iowans, but people across the globe.

“Having a robust pork economy in Iowa is essential to the state,” said Ross. “It’s responsible for about 140,000 jobs within the state. “We produce about 30% of the market hogs within the United States and more than 25% of our pork leaves to other countries.”

How long have you worked for ISU Extension and Outreach?

What do you do for ISU Extension and Outreach?

I serve as the supervisor for the swine field specialists and some staff members within the Iowa Pork Industry Center. I also have research responsibilities and I work with pork industry associations as well as independent and integrated swine producers across Iowa.

What is the best part of working for ISU Extension and Outreach?

Having relationships with different people in the industry is very enjoyable and when you’re working on something important, getting to interact with the people who the work has the most impact on is rewarding.

What drew you to Iowa State?

The position as an animal science professor was probably the ideal position for me at the time, followed by my current position with IPIC. I grew up in Iowa and my wife is from Iowa and this is where we wanted our family to be.

Do you have any big upcoming projects or events?

At the IPIC, we have made it a priority to write grants involving Iowa State faculty and staff and also faculty from other universities. One project was our pig livability project, which included a first-ever International Conference on Pig Survivability, recently held in Omaha Nebraska.

We also will be holding the IPIC sow summit in December, and each year we host the Iowa Swine Day in June.

With your time with extension, what is one thing you would like to accomplish (or are especially proud to have accomplished) in this position?

I think it’s a work in progress. I’m really proud of the team we have at Iowa State and the synergies that we’re creating by pulling the right minds together to solve problems. That’s also something we want to continue working on getting better at. There are over 60 faculty programs at Iowa state that do something related to the swine industry.

Name one fun thing about yourself that not many people know.

I love to hunt and fish, especially deer and pheasants. I also like traveling outside of Iowa and visiting the mountains.

What do you do in your free time?

Anything outdoors. When my kids were younger I was very involved with youth baseball. I helped coach and I’ve been a coach for many years.

How do you create a #StrongIowa?

Agriculture in general contributes to a strong Iowa. We need to recognize how all the pieces in animal agriculture and row crop agriculture fit together to create a working economy where people have good jobs and low unemployment, while assuring our ability to produce food for a global population.